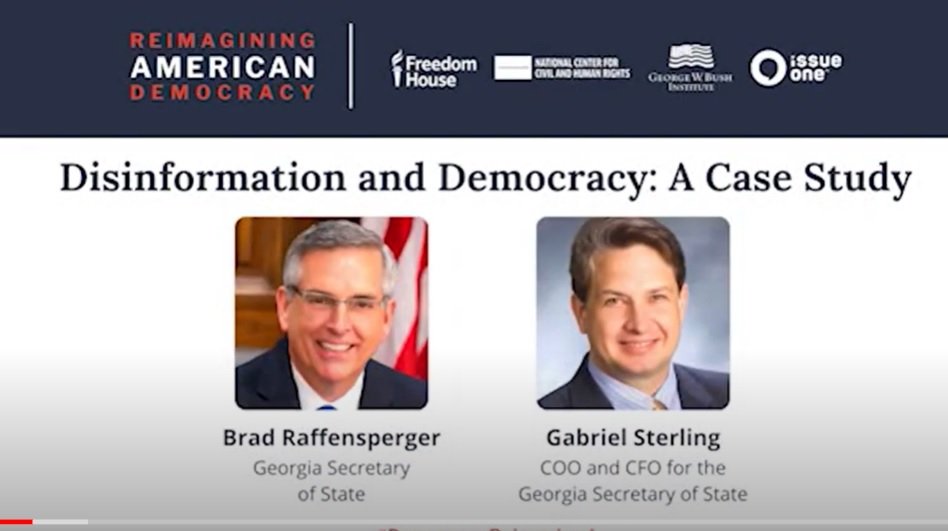 Georgia Secretary of State Brad Raffensperger and his COO/CFO were on a far-left show from Freedom House about ‘Disinformation and Democracy’.  This program was like watching thieves discuss protecting of your assets.

Freedom House bills itself as a democratic institution founded on the core conviction that freedom flourishes in democratic nations where governments are accountable to their people.

We’ve written about Raffensperger and Sterling multiple times at The Gateway Pundit since the 2020 Election steal in Georgia.  As of April, the state still lacked the legally required chain of custody documentation for over 300,000 ballots, and yet in the weeks after the election Raffensperger signed off on the election results giving Joe Biden the win by 10,000 votes and mandating a runoff election for two US Senate seats.

Five Months Since the Election, Georgia Still Lacks Legally Required Chain of Custody Documentation on 355,000 Votes (Most All Likely for Joe Biden)

Just this week we reported on the conflicting data coming out of Fulton County after the election where the numbers being reported made no sense.

We also reported this week that both Raffensperger and Sterling are connected to the firm Landmark Communications which grooms Democrats for Republican jobs.

Even Tucker Carlson, who’s been silent about the election steal, reported on the horrible results from a cursory audit of Fulton County.

Yesterday, Freedom House invited both Raffensperger and Sterling on their show about ‘disinformation’.  The choice of these two clowns was more than laughable, it was a shame.  Raffensperger shared:

“The election we had in Georgia was fair and accurate at the end of the day.  I know that no election is ever perfect, but if you looked at all the points that we checked out, it never would have been enough to overturn the results.”

During the segment, both Georgians laughed about the questions, and then Sterling, who is the more outspoken of the two, shared the following:

“The main thing people have to do, is hard to do, because our inclination is to, I want to find people who agree with me because that makes me feel better.  You have to train yourself to get away from that idea and understand that the vilanizing that we have done on all sides, in this ramping up, and it wasn’t just Donald Trump.  We were building up to this point over the last few decades.  And as I said, from my point of view, this started in 1986 with the villinization of Robert Bork, and it just kinda escalated from there over time.  And, I don’t know how you unwind it but it takes somebody to be mature and not take advantage of things.  The problems we have right now are the incentives are there to continue doing the same thing.

All Raffensperger and Sterling have to do to clear this up is to allow a forensic audit to take place in the state.

They know the election was stolen and yet they are calling The Gateway Pundit fake news.  WTH?