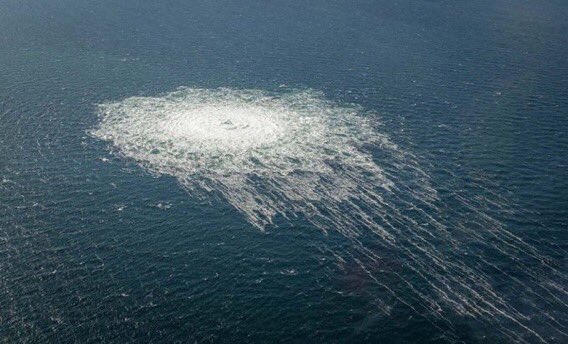 On Monday saboteurs targeted Russia’s Nord Stream 1 and 2 gas pipelines in the Baltic Sea. The attacks that shut down both pipelines from Russia are suspected as sabotage according to U.S. and European leaders and analysts.

Sweden reported detecting explosions early Monday morning and Monday evening, with the morning one registering 1.9 on the Richter scale and the evening explosion 2.3.

The Danish military released photos and video of the gas leaks bubbling up in the Baltic Sea:

The pipelines are protected by a layer of steel-reinforced concrete reported the Guardian:

“The steel pipe itself has a wall of 4.1 cm (1.6 inches) and is coated with steel-reinforced concrete up to 11cm thick. Each section of the pipe weighs 11 tonnes, which goes to 24-25 tonnes after the concrete is applied.”

How strong is a Nord Stream pipe? Quite!

The steel pipe itself has a wall of 4.1 centimeters (1.6 inches), and it’s coated with another 6-11 cm of steel-reinforced concrete. Each section of the pipe weighs 11 tonnes, which goes to 24-25 tonnes after the concrete is applied. pic.twitter.com/BFYnv36CaF

EU Parliamentarian Radek Sikorski, the Chairman of the EU-USA delegation, cheered the US following the explosions, suggesting Joe Biden had something to do with it.

Guess Who Threatened to Take the Russian Nord Stream Pipelines Offline Before They Were Sabotaged This Week?

On Friday Russian leader Vladimir Putin blamed the US and UK for setting off the explosions, saying, “It’s obvious to everyone who benefits from it. Those who benefit are the ones who have done it.”

The US and UK orchestrated the blasts on the Nord Stream 1 and 2 gas pipelines in the Baltic Sea, which delivered Russian natural gas to Germany, because they “obviously” benefit from it, President Vladimir Putin insisted on Friday.

Putin accused Washington of trying to pressure the EU into banning Russian supplies to “completely get its hands on the European market.”

“But the sanctions are no longer enough for the Anglo-Saxons,” he said, using Russian shorthand for the US-UK transatlantic alliance. “They have turned to sabotage – it’s unbelievable, but it’s a fact – by organizing the explosions on the Nord Stream international gas pipelines,” the president stated.

“They de facto began the destruction of the common European energy infrastructure. It’s obvious to everyone who benefits from it. Those who benefit are the ones who have done it.”