Twitter Banned 70,000 People Sharing ‘QAnon Content’ Following Capitol Protest, Even If They Weren’t There and Had NOTHING to Do with the Violence 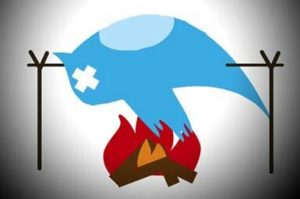 Twitter announced on Monday that they banned 70,000 accounts sharing “QAnon content” following the protest at the Capitol.

Of course, it goes without saying that they did not do the same for accounts sharing Black Lives Matter content during the deadly riots last year.

Twitter said in a statement that the mass censorship is “to protect the conversation on our service from attempts to incite violence, organize attacks, and share deliberately misleading information about the election outcome.”

“We’ve been clear that we will take strong enforcement action on behavior that has the potential to lead to offline harm. Given the violent events in Washington, DC, and increased risk of harm, we began permanently suspending thousands of accounts that were primarily dedicated to sharing QAnon content on Friday afternoon,” the blog post stated.

The platform added that the accounts “were engaged in sharing harmful QAnon-associated content at scale and were primarily dedicated to the propagation of this conspiracy theory.”

They also banned the president himself.

Big tech’s attack on free speech did not end there.

Apple, Google, Amazon, liberal media, and other companies all worked together to effectively shut down Parler — a free speech platform that people had began to flock to in order to avoid censorship. The platform was number one in the Apple app store when it was taken offline.

18 mins ago Survive the News

18 mins ago Survive the News