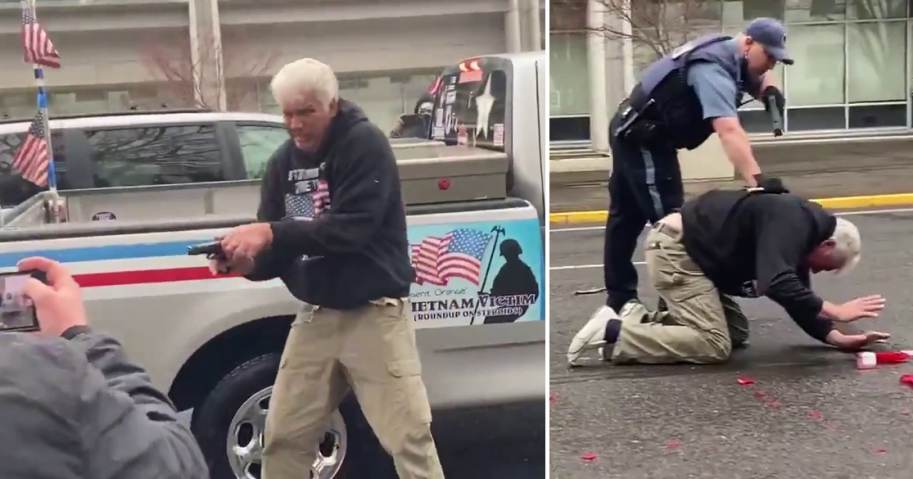 During a patriotic cruise through Salem, Oregon, several black bloc clad antifa terrorists turned out to head off what they, for some reason, think are a bunch of racist white supremacists, one old man got caught up in fray. His truck was pummeled by debris, shattering windows and hitting him. As he gets out of his truck, the terrorists continue to throw objects at him as they close in. Surrounded and under direct threat, the old man draws his pistol and racks a round.

Now the big bad antifa thugs realize they’ve messed with the wrong guy, and they quickly back away, while continuing to yell at him.

Seconds later police come running in. Not to head off the violent antifa thugs, no no. After all, this is Oregon we’re talking about here. Cops draw their weapons and order the old man to the ground. He tosses his gun into the bed of his pickup truck as he hits the ground, arms outstretched. Riot cops come running as the old man is ordered to stay down and lock his fingers above his head.

The antifa militants cheer on the police as the old man is arrested. All for not wanting to become the victim of further violence from antifa.

There are multiple video angles of the incident:

Interesting that this Twitter user refers to the “far right” as being the cowards, yet apparently has no issue with gangs of able bodied 20’s somethings of antifa ganging up on an old man. That’s somehow not cowardly:

The arresting officer appears to be Senior Trooper Oxenrider

These cops seemingly had no issue with the antifa thugs lobbing all sorts of rocks and paint balloons at vehicles throughout the afternoon, as the police were nowhere to be seen during all of that, which happened right out front of the state capitol building. The cops showed up after the fact to declare an unlawful assembly and chase everyone away.

UPDATE: Evidently the man was released from custody and allowed to return to his truck. It is unknown if he was cited or what, but police were talking to him as the contact came to a close. We will keep an on this and follow up if needed.

SECOND UPDATE (Monday, 3/29): The Oregon State Police clarified that the guy was merely “detained” and not arrested, nor is he currently facing charges. However that could all change if district attorneys opt to file charges:

On Sunday, March 28, 2021, events were held by two separate groups intending to meet at the state capitol grounds. The Oregon State Police along with our partner agencies the Salem Police Department and the Marion County Sheriff’s Office were actively monitoring the protests.

The following individuals were arrested and lodged at the Marion County Correctional Facility on charges related to criminal activity during today’s event:

These are open criminal cases and will continue to be investigated. Anyone with information related to these incidents or any other criminal acts which took place today, March 28, 2021, are encouraged to contact the Salem Police Department tips line at 503-588-8477.

The Oregon State Police would also like to clarify misinformation regarding the circumstances around the man who was detained after displaying a firearm.

The person in the photo was the victim of extensive damage to his vehicle.  When he stopped to assess the damage, he was assaulted with pepper spray.  After being assaulted with pepper spray, the person pulled a handgun from his waistband to defend himself.  He did not point the weapon at anyone and dropped it when ordered to do so by Law Enforcement.  This person has a valid concealed handgun license. This person was detained, interviewed and then released.  Reports will be forwarded to the Marion County District Attorney’s Office for review.