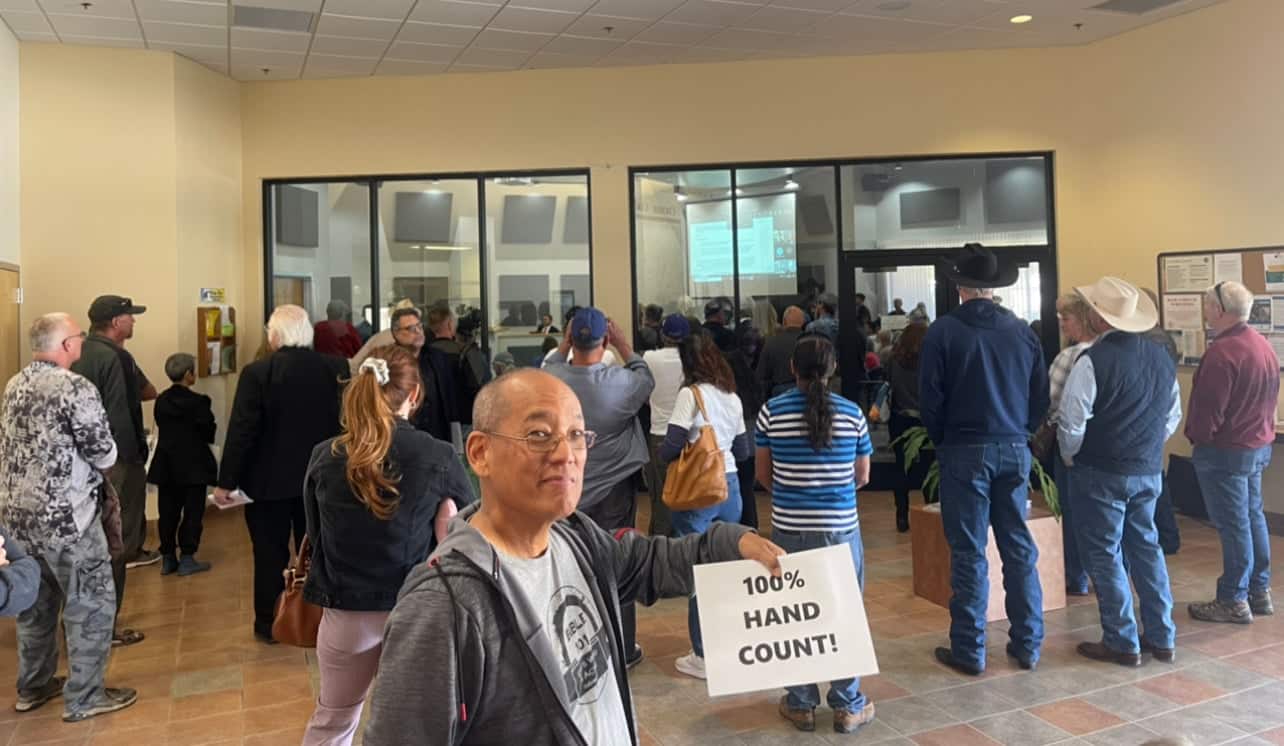 Arizona’s Cochise County Board of Supervisors is set to vote to “order a hand count of all ballots cast in the General Election to be held on November 8, 2022, to be completed prior to Canvass of Election Results” today at their special meeting.

A massive crowd of residents has overfilled the meeting room to speak in support of this vote.

The Board of Supervisors provided the following background on this agenda item:

TRENDING: WTH? Garland and Wray Hijack Your Monday to Announce Arrests of Chinese Double Agents Harassing Chinese Nationals in US — BUT NOTHING ON KONNECH CEO?

Over 100 volunteers have mobilized and seek to be vetted, trained and participate in a hand count of all ballots in our County for the upcoming General Election. They are wishing to take part in this way to help people (including a few of the participants) who have lost trust in elections to see that elections are reliable and secure in our county. Two other results of this hand count will be simply a 100% audit of machine accuracy and a test of our back-up plan in case some or all of our machines become compromised or fail at last minute. This count will not affect the outcome of this election County Recorder David Stevens, our State Senator and Representatives are in support of this and will be able to follow through with proper action in the Legislature, if that is needed. None of the voting process will be altered.  Must be completed prior to Certification of Election. Machine count will determine election outcome.

Election Dept Staff or BOS Designee to Call for applicants to execute the hand count.  The same to select, vet, and train applicants.  Using methods prescribed by statute for hand counts and suggestions from Recorder Stevens, selected staff members will design a secure and executable plan.  Provide for supplies and secure areas to hold the hand counts. Report results of the hand count to Board of Supervisors not less than 5 days prior to the Certification of Election.

This new decision by Cochise County comes after Arizona Corporation Commissioner Jim O’Connor sent a letter to all Arizona Counties demanding they immediately cease the use of voting machines in the upcoming 2022 General Election and gave testimony at the Rise of Truth Summit.

As The Gateway Pundit recently reported, corrupt Arizona Secretary of State Katie Hobbs has threatened to sue the County if they proceed with their 100% hand count audit of the machines.

EXCLUSIVE: Katie Hobbs Threatens To SUE Cochise County If Supervisors Vote to Hand Count Midterm Election Ballots – County Supervisor Says “We Will Have George Soros For Governor If We Elect Her”

The County will still count ballots using machines, but they will conduct a hand count audit of 100% of the ballots, which Katie Hobbs claims is illegal.

C. If for any reason it becomes impracticable to count all or a part of the ballots with tabulating equipment, the officer in charge of elections may direct that they be counted manually, following as far as practicable the provisions governing the counting of paper ballots.

Cochise County Supervisor Peggy Judd told The Gateway Pundit, “we will have George Soros for Governor if we elect her. It will be them who are actually running our state.”

Judd also told us that she has received massive support for this action by the Board. “For every one email I have received in opposition, I have gotten 15 more in support,” said Judd. It appears that Katie Hobbs’ attempt to mobilize her radical left supporters with a threatened lawsuit has failed.

Katie Hobbs has not come out of the basement to campaign for Governor or debate Kari Lake, and she is terrified of a free and fair election this November.

Last week, The Gateway Pundit reported that Katie Hobbs has spent almost no time in her office while running for Governor.

She is likely planning to steal another election from her opponent Trump-Endorsed Kari Lake and other Trump-Endorsed candidates for statewide office.

This new information about Hobbs’ refusal to show up for work came just after we reported on an election “error” that sent an incorrect ballot to as many as 6,000 voters after incorrectly flagging them as not having proof of citizenship on file.

Hobbs’ office now claims that a hand count of ballots will risk the “accuracy and integrity of our elections.”

However, The Gateway Pundit reported on a Cybersecurity and Infrastructure Security Agency report that revealed massive security vulnerabilities and the potential to install malicious code in Dominion voting machines that were used in Arizona and Georgia.

The Board is scheduled to discuss this decision and take action today at their 2 pm meeting.

Watch the meeting live at this link.

SICK: Bearded Drag Queen Toasts To “Those Who L*ck Us Where We Pee” In Front Of Young Children At Texas Drag Show (VIDEO)