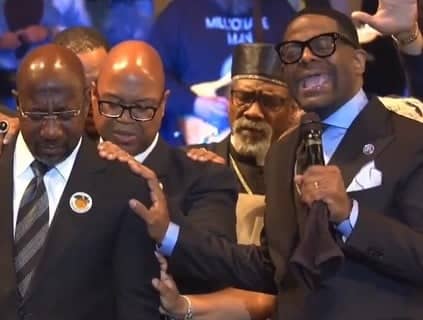 The entire service seemed more like a pep rally to get churchgoers to vote for Raphael Warnock in the upcoming Georgia Senate run-off.

During one part of his sermon, Woke Preacher Clips reported Murphy preaching, “I’m decreeing and declaring that folk who had no intention on voting for Raphael Warnock…the Spirit Of God is gonna arrest (or rest, unclear) them.”

A couple dozen pastors from around the country take the stage. Bishop James Dixon, president of NAACP Houston, revs up the crowd:

“God’s about to cause a shift in this nation, in this world, through the election of Raphael Warnock. We’re about to praise him into the Senate!” pic.twitter.com/SNZzDfWI2h

Senator Warnock would later take the stage and say voting is a type of prayer.

He then would encourage people to pray (vote), Monday-Friday and again next Tuesday.

Warnock ties his stump-speech line “A Vote Is A Kind Of Prayer” to two verses about actual prayer, James 5:16 and 2 Chronicles 7:14, to encourage turnout.

Sen. Warnock was introduced by Pastor Murphy as a man who stands up for the “oppressed” but Warnock’s policies on abortion say otherwise.

In 2021, the Reverend turned Senator, tweeted he wanted to codify Roe v. Wade into law.

No one should be able to mandate what a woman does with her body. Not 9 Supreme Court Justices. Not anyone.

We need to codify Roe v. Wade into law immediately to protect this right.

Democrats have long used the pulpit to push leftist ideology instead of actual Scripture.

Last year, during the height of the pandemic The Gateway Pundit reported that Democrat Governor of New York Kathy Hochul went behind the pulpit and stated that the “vaccine is from God… and I need you to be my disciples.”

NY Governor Kathy Hochul goes on unhinged religious rant, says “The vaccine is from God” and “I need you to be my Apostles”: pic.twitter.com/mdc1sPMfB2